Title: The Mission of Apollo 14

January 2021 marks the 50th anniversary of the third successful lunar landing in the Apollo program. There was extra pressure on the crew of Apollo 14 to pull off a successful mission, following on the aborted Apollo 13 mission nine months earlier. 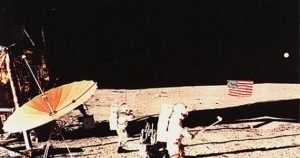 Changes were made to the Command-Service Module to prevent the same problems which occurred during Apollo 13. In spite of this, there were three instances in the Apollo 14 mission where the successful landing was in doubt due to technical problems. Once on the lunar surface, astronauts Shepard and Mitchell spent two days exploring the Fra Mauro highlands. They used a lunar hand-cart to help them carry tools during their long lunar walks. The final few minutes on the lunar surface, one astronaut made use of a lunar six-iron and a few golf balls he had brought on the journey.